The Name of the Blog

The name of my blog, Festina Lente, is an old Latin phrase which means “make haste slowly.” It was the motto of the Venetian printer Aldus Manutius, a fifteenth century Italian humanist. Among Manutius’s accomplishments were inventing italic type, establishing the modern use of the semicolon and appearance of the comma, and creating what could be regarded as the first paperback books: small, inexpensive volumes bound in vellum.

His famous dolphin and anchor device has been used since Roman times when Caesar Augustus used the image to illustrate the motto Festina Lente. The motto was popular in the Renaissance: Shakespeare himself alluded to it multiple times in his plays. In modern times, the dolphin and anchor is the symbol of the Doubleday publishing company, and a fictional secret society surrounding Aldus Manutius and his works provides the main plot point for the novel Mr. Penumbra’s 24-Hour Bookstore, which is quite possibly my favorite book. 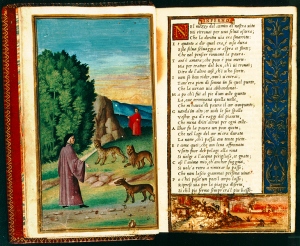 The first page of the Aldine “Inferno” by Dante, printed in 1502.

Calvino himself adopted Manutius’s  emblem and motto as his own, and in recognition of that, I’ve chosen to name my blog Festina Lente.

When I started thinking about my own aesthetic, I kept remembering how Professor Ulmer told us to relate each work of E-Lit to our own experience. This blog has challenged me to explore the personal, subjective aspects of art and science, both of which are created by humans to understand and interpret the world around us. This reminds me of a quote from Protagoras, a Greek philosopher who famously quipped, “Man is the measure of all things.” It also reminds me of a line from Alexander Pope’s An Essay on Man, which is a masterpiece of Enlightenment poetry. Pope said, “The proper study of mankind is man.” This is the essence of the humanistic ideal, by which I try to live my life. I believe that all the good and evil things in the world are the product of human choices, not any outside supernatural forces.

Pope called humankind “the glory, jest, and riddle of the world.” To me, that means that even though humans are imperfect, we are still capable of creating glorious things. Through literature and art, we rise above ourselves, and through science, we come to know and understand the world we live in. I have chosen Pope’s quote as my motto to remind me that the meaning of my life comes from my experience of my life. Everything I learn, everything I create, everything I experience, whether good or bad, adds meaning to my life.

With that in mind, I then turned to the question, what pleases me in a work of art? I made a few notes about my aesthetic sensibility. I am drawn to: 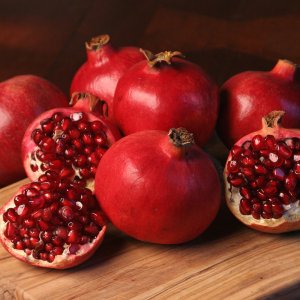 Ultimately, I chose the pomegranate as my emblem. I know this may seem a little out there, but there’s a reason for it, I promise. First of all, the pomegranate is pleasing to the senses: it has a rich color and sweet taste, and it is visually engaging. Additionally, the pomegranate has a wide variety of connotations, beginning with the myth of Persephone, who was cursed to stay in the underworld for six months out of the year for eating six pomegranate seeds while she was there. Unfortunately for humanity, her mother Demeter was so upset by the loss of her daughter that she failed to make the earth fertile, and no crops grew until Persephone came back and her mother went about her work again.

For thousands of years, the pomegranate has been used in art to symbolize fertility and prosperity. I chose the pomegranate as my emblem because it reminds me that I need to have a fertile imagination to be creative and to appreciate and create art. An active imagination is essential to the creative process: I need to be able to make connections between disciplines and notice patterns. The pomegranate is a complex, beautiful object in itself; that, in addition to its rich symbolic meaning and history, makes it the perfect emblem of my personal aesthetic.