The quality of multiplicity lends itself well to Cornell’s aesthetic. After all, what were his boxes but collections of loosely associated artifacts? Going off of that, the novel itself is a compilation of visual images, created by text, which combine to create a story. 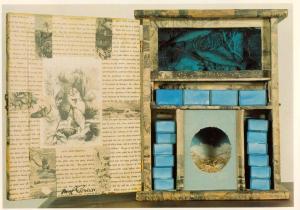 As I mentioned in my adaptation post, I would like to make the abstract aspects of the novel, such as the characters’ interdisciplinary approach to problem solving and the multiple ways of organizing and understanding information, concrete through the use of images in my blox. I plan to combine little snippets of text, fragments of LEGO bricks, and lines of computer code to create my blox and mimic the scavenger hunt-esque aesthetic of Cornell’s boxes.

I think my images of LEGOS and letters will guide my visual adaptation of the multiple aspect of the novel. The two units are similar in many ways; they complement each other the way natural language complements code. Both are geared towards some type of constructive problem solving, which reflects the characters’ cooperation.

Again, since there is such a clear relationship between multiplicity and the visual in the novel, I don’t think it will be too difficult to adapt this experience as a blox. I will continue with my practice of making an abstract aspect of the novel concrete through use of a visual motif within the novel.

As with visibility, it’s easy to see how Mr. Penumbra exhibits Calvino’s quality of multiplicity. For one thing, Clay has to tackle the mystery from multiple angles, both high and low tech. He enlists the help of Oliver Groan, archaeology student, to sift through Penumbra’s ancient files and computer system; Grumble, a mysterious hacker who provides him with a makeshift book scanner on short notice; Kat, who has access to Google’s virtually unlimited resources; Neel, who finances most of the crew’s operations; and Penumbra, who is Clay’s window into the world of the Unbroken Spine and the Festina Lente Company.

In addition to the multiple ways to solve a problem, the novel does an excellent job of illustrating the many different methods of acquiring and storing knowledge. It begins with Manutius and his incunabula and ends with Kat and the Google Knowledge Graph.  Mr. Penumbra resembles Calvino’s encyclopedic novel in that it explores the way information and language, and the way we process those, change over time and adapt to new technologies and environments. Like the LEGOS I mentioned in my earlier posts, a finite number of letters combines to create a multitude of words and meanings. Mr. Penumbra celebrates this multiplicity of language in its many forms, both print and electronic.

In the novel Sophie’s World by Jostein Gaarder, Sophie learns about the Greek philosopher Democritus’s theory of atoms by playing with LEGOS. She realizes she can create an infinite number of objects from a finite set of building blocks. Further, the blocks themselves cannot be broken down into smaller parts, just like atoms.

LEGOS, like atoms, can teach us a lot about multiplicity. The universe is made of just a few basic elements, yet they combine in various ways to create stars, water, plants, animals, entire worlds. The universe has not exhausted itself; it continues creating and creating. We don’t know exactly how it began, nor do we know exactly how it will end. All we know is that we can learn about it during our lifetime. Our knowledge will be incomplete, like Calvino’s encyclopedic novel, but the quest for knowledge is a worthy end in itself, and a work of art. 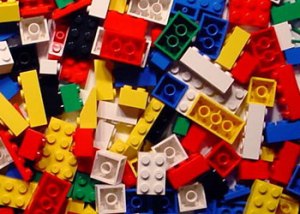 Lupton and Phillips state that “Modularity is a special kind of constraint. A module is a fixed element used within a larger system or structure. For example, a pixel is a module that builds a digital image. . . . A nine-by-nine grid of pixels can yield an infinite number of different typefaces. Likewise, a tiny handful of LEGO bricks contains an astonishing number of possible combinations. The endless variety of forms occurs, however, within the strict parameters of the system, which permits just one basic kind of connection.”

This relates to multiplicity in art because although humans are pretty much the same biologically, each human being has a different experience and attitude toward the world. This is what enables us to create such a stunning variety of art and literature; each of us has something unique to bring to the creative process, allowing for many facets of experience across one human “kind.”